To check our simulators, please visit:

This article presents only a review of the Stewart-Gough platforms and includes quotations from the literature.

In fact SGP is the representative case of parallel manipulators (Mruthyunjaya & Dasguptaa, 2000). They have a fixed base, which is connected to a mobile platform by six legs (called struts) with adjustable lengths, as illustrated in Figure 1 . The joints connecting the struts to the plates are normally ball and socket or universal joints.  The mobile platform is also called end effector or simply effector, motion of which is controlled by the lengths of the struts. Since there are six parameters defining a motion is space, there is no redundancy in the system and it is statically is determinant, although additional legs can be included, as will be discussed later.  Having only six length parameters to define the positions and motion of the system is clearly an advantage for the clinical usage by surgeon and patient. Nevertheless, it is posing a rather complex problem of finding the parameters that are required to define the position/motion of a rigid body relative to any (fixed) coordinate system, namely three angles of rotation and three translational coordinates.

SGP can be considered as a parallel robot, in contrast to the regular serial robots. The reason is that while in serial robots arms are connected to form an open kinematic chain, in SGP, the (six) arms (or legs) are all used to connect the base to the mobile platform, forming a closed kinematic chain.

The origin of the term robot can be found in a science fiction play written by Karel Čapek (1920). The play titled R.U.R. was published in Czech in 1920 as an abbreviation of Rozum's Universal Robots. It was a collective drama with a comic prologue and three acts and was first performed in National Theatre in Prague on January 25, 1921. In Czech language “rozum” means wisdom and “robota” means servitude/forced labour/drudgery. Since the word robot was apparently coined by the author's brother, cubist painter and writer Joseph Čapek, the term has since been used to refer to a wide range of man-made tools from devices to programs which are used to perform various tasks automatically and autonomously by replacing humans (Gogu, 2008).

The closed mechanical chain makes it impossible to derive the explicit kinematic equations. Yang and Lee (Yang & Lee, On the Workspace of Mechanical Manipulators, 1983; Yang & Lee, Feasibility study of a platform type of robotic manipulators from a kinematic viewpoint, 1984) performed a kinematic feasibility study of the Stewart platform manipulator and made the first attempt towards its workspace analysis including the physical restrictions on the spherical joints. Considering a special architecture of the Stewart platform, they developed an algorithm for finding the section of the reachable workspace on a particular plane and provided a numerical evidence to the fact that the workspace and manoeuverability of parallel manipulators (and the Stewart platform in particular) is rather poor (Mruthyunjaya & Dasguptaa, 2000; Yang & Lee, On the Workspace of Mechanical Manipulators, 1983; Gogu, 2008).

Nonetheless closed kinematic link of parallel manipulators renders their workspace limited whereas a for an open-chained serial robot manipulator the workspace is only limited by the total length of its arm.

The first examples of a parallel manipulator were proposed in 1928 by J.E. Gwinnet which is illustrated in Figure 2 . Another early example was the two planes connected by legs with adjustable length by Gough (1956-1957) and by Gough and Whitehall (1962) as part of a tire-testing machine (Nair & Maddocks, 1994), as shown in Figure 3 . The moving platform, to which a tire is attached, is linked to the ground by 6 links with varying lengths. A universal joint is put at one of the ends of each link, a ball-and-socket joint at the other. Changing the length of the links modifies the position and the orientation of the moving platform, and therefore of the wheel. This wheel is driven by a conveyor belt and the mechanism allows the operator to measure the tire wear and tear under various conditions (Merlet, 2006). 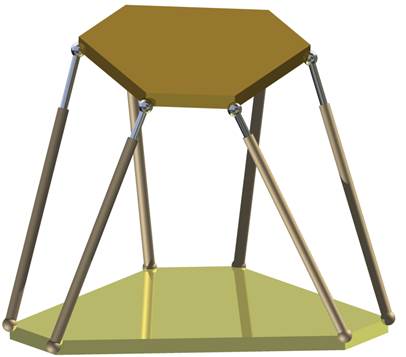 The mechanism of Gough and Whitehall was older and closer to the description of parallel manipulators, this manipulating structure has gained popularity among researchers as generalized Stewart platform or simply as 'the Stewart platform'. In recent years, some authors have referred to the mechanism as the Stewart-Gough Platform (SGP).

Figure2 The spherical mechanism proposed in 1928 by J.E. Gwinnet

Another early example of parallel robots was proposed by K. Cappel in 1967 for flight simulation. A drawing of his design is shown in Figure 5.Figure 6 show a modern flight simulators made as SGPs. 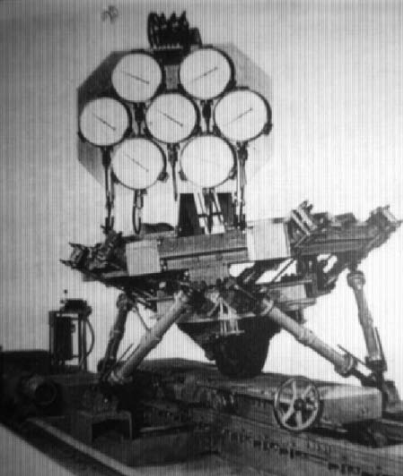 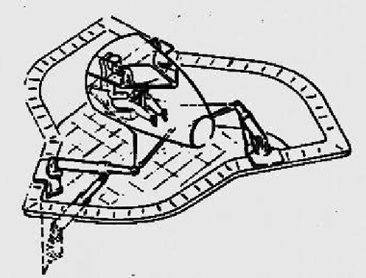 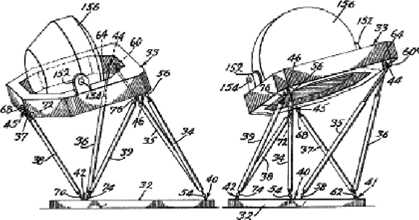 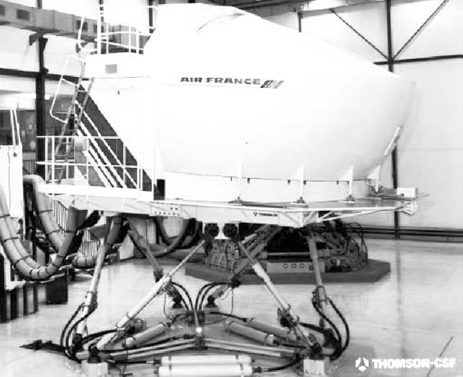 Figure6 The Airbus A340 simulator.

A problem with the serial robots is that as the length of a serial open-chained robot increased the bending moment caused by the load which it carries increases. As serial robots can be considered as cantilever structure, they vibrate at high speeds.

Open-chain serial manipulators possess both the advantages and the disadvantages of the human arm. Human arm like (anthropomorphic or Shi and Fenton Platform-Type) The above characteristics are obviously due to the fact their kinematic chain is closed and the load can be shared by the legs. For the case of SGP the kinematic precision can also be high. This is a result of the position of the platform being defined by six length parameters and lack of any redundancy. This type of manipulator is interesting because of its extreme redundancy, its large workspace is large and good load capacity/mass ratio: the LX4 mass is 120 kg for a transportable load of 75 kg (Merlet, 2006). However, such a robot is difficult to control. There are some manipulators which are called hybrid manipulators. They can be hybrid in the sense that they have features of both parallel and serial manipulators. An example of hybrid manipulators is shown in Figure 7 . There are undoubtedly other applications of SGPs, as Figure 8 shows a curious application of a hexapod design. 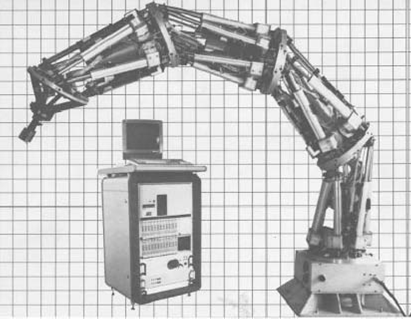 Figure7 The Logabex robot LX4, made by piling up left hands. 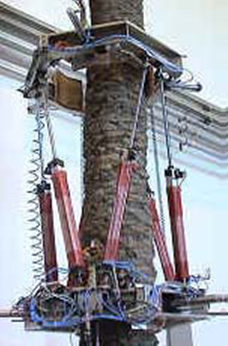 Figure8 Another application of hexapod design

The singular positions were studied by Fichter (Fichter, 1986). Singularities are classified into three categories:

The above cases are presented by Wolf and Shoham (Wolf & Shoham, 2003).

Amount by which the degree of freedom of a robot exceeds the number of independent variables that are necessary to define the task to be performed. Redundancy Existence of more than one means to accomplish a given function. Manoeuvrability Ability of a robot with redundant mobility to solve a task by using various combinations of movements of its links (Gogu, 2008).

In his keynote speech entitled “Still a long way to go on the road for parallel mechanisms” presented in ASME 2002 DETC Conference, Jean- Pierre Merlet from INRIA Sophia Antipolis, France, the author of the first books on parallel robots has stated:

“Synthesis of parallel robot is an open field (there is a very limited number of papers addressing this issue) and, in my opinion, one of the main issue for the development of parallel robots in practice”. The importance of design synthesis defined by structural and dimensional synthesis is also reiterated by J-P. Merlet (Merlet, 2006):

The performances that may be obtained for a robot are drastically dependent on both synthesis.” (Gogu, 2008).

It is important to note medical applications of parallel manipulators. It is possible to use another advantage of parallel structures compared to their serial counterpart that they are much less sensitive to scaling effect, and are therefore appropriate for micro-robots. For medical applications this is appropriate for laparoscopy or Minimally Invasive Surgery (MIS) (especially endoscopy. Wendlandt built an endoscope active head made of a 3 degrees of freedom robot that is actuated by wires. Another solution for an endoscopic head with the Mips 3-d.o.f. robot is also suggested, which uses electrical motors. Such applications include Computer Aided Surgery in fields such as general (endoscopic) surgery, neurosurgeries (e.g. spinal surgery), ophthalmological surgery (yet on dogs!) and also in tele-surgery systems. A parallel micro-manipulator used in endoscopy is shown in Figure 9.Figure 10andFigure 11 illustrate two spinal surgery robots. A proposed design for an ophthalmologic surgery using a parallel robot is illustrated in Figure 12 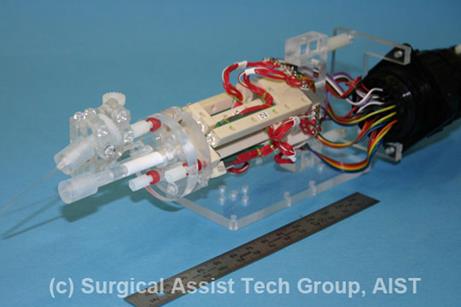 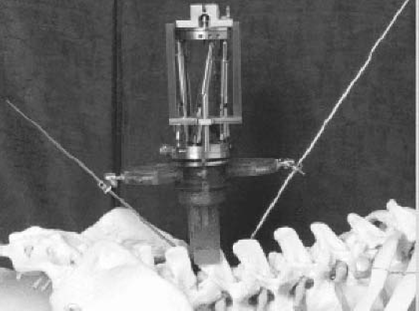 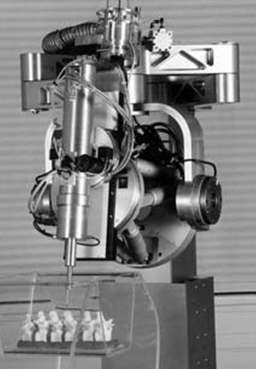 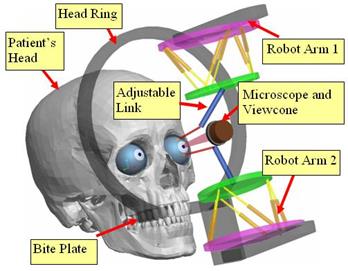 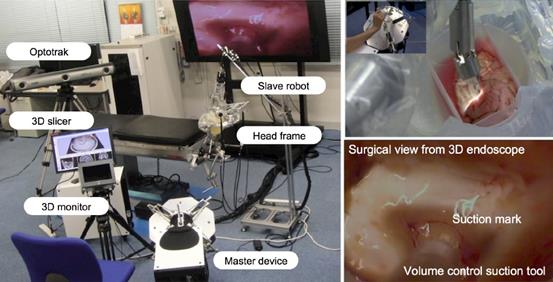 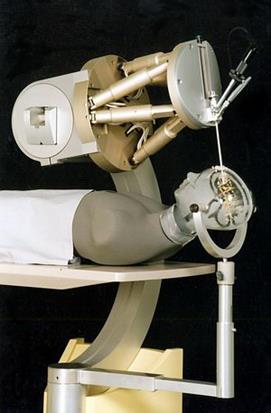 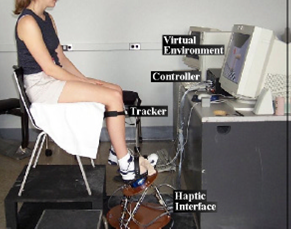 Figure 17 show a parallel robot with 9 legs called a nanopod , of which 3 are obviously providing redundancy. Links 1 to 6 are actuated, and links 7-9 are passive and only useful for the direct kinematics (Physik Instrumente). 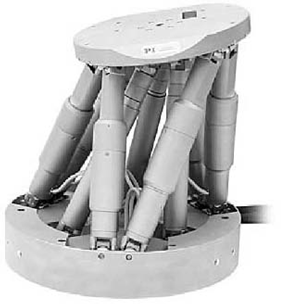 Figure17 A 6 degrees of freedom parallel robot with 9 legs.

The forward kinematics problem of the Stewart Platform Mechanism (SPM) does not have a unique solution since it involves solving a polynomial of order 16 (Yurt, Yanli, & Ozkol, 2007). Owing to their coupled and closed kinematic loops, forward kinematics is one of the most challenging problems in the area of parallel manipulators (Wang Y. , 2007).

Its closed kinematics chain which provide high mechanical stiffness also present an extremely difficult theoretical problem for forward kinematic and dynamic analysis. This problem is an impediment to the development of practical control algorithms capable of real-time trajectory generation, a necessity for industrial application of the manipulator.

The closed mechanical chain makes it impossible to derive the explicit kinematic equations. Since there is no explicit expression available for the forward (Liu, Lewis, Lebret, & Taylor, 1993), a majority of the studies reported are concerned with the direct (forward) position kinematics of the manipulator (Lee & Shim, 2001; Jakobovic & Jelenkovic, 2002; Yurt, Yanli, & Ozkol, 2007; Rolland & Chandra, 2009; Wu, Wu, & Yu, 2008; Husty, 1996; Raghavan, 1993; Wang, Hao, & Chen, 2008; Wohlhart, 1994; Dasgupta & Mruthyunjaya, 1994). Some of them attempt to solve the problem numerically while others aim at closed-form solutions to certain special cases (Dasgupta & Mruthyunjaya, 1994; Innocenti & Parenti-Castelli, 1991; Ji & Wu, 2001). Essentially, this problem requires the inversion of a set of nonlinear functions that define the leg lengths in terms of the configuration variables (Nair & Maddocks, 1994).

This article included a brief and general introduction to parallel manipulators, called the Stewart platforms or the Stewart-Gough platforms, its origin and its various applications. The important issue of singularity SGPs was briefly introduced. Since the TSF is an example of medical application of the parallel platforms, attempt was made to give a list of other medical applications of the SGP. As in many other engineering systems, the topic of redundancy is important in parallel robots, therefore it was also mentioned, despite the fact that TSF does not have redundancy, however it could not be ruled out as a possibility in future designs. Finally, the most important problem in SGPs, namely forward kinematics was outlined, which is the subject of the article that follows.

Kinematic Modelling of the TSF

In the above chapter, it was demonstrated that the TSF is an adaptation of the notion of hexapods or 6-6 parallel manipulators, also called Stewart platforms. Therefore, to analyse the TSF, it is essential to have a solution for its Forward Kinematics (FK), i.e. to relate the lengths of the struts to the position and orientation of the rings relative to each other.

To have such a solution, attempt was made to solve the FK for a general 6-6 parallel manipulator.

InFigure 3.1, or in fact in general, it is obvious that:

from O1x1y1z1 to Oxyz. Such a transformation contains a rotation as well as a translation. The translation is vector connecting the two origins, i.e.

Now, given the fact that the length of 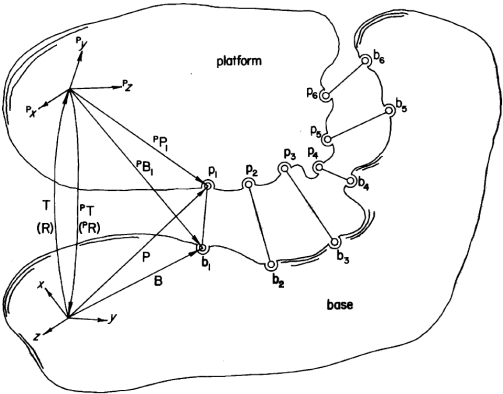 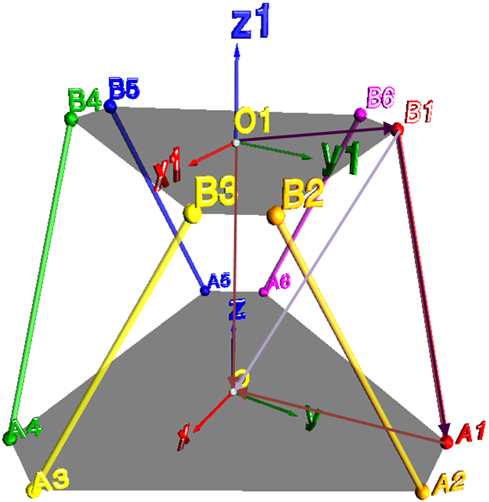 The resulting 6 equations will form a system of nonlinear equations. It can also be said that the given the fact that the distance AnBn AiAj and BiBj are known, the Euclidean definition of distance in Cartesian coordinates can be used to derive the following equations:

As mentioned in the above chapter, there is no analytical solution to these equations and they are generally solved using numerical methods.